Behind the scenes - People 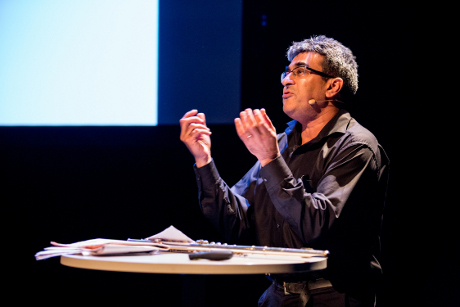 Since obtaining his university degree in 1985 and qualifying as a UK Chartered Accountant, Nigel has worked passionately for over 20 years for the prevention, detection and investigation of fraud and corruption.He has helped international organizations develop strategies to ensure that Ethics and Integrity are fully integrated into the strategy from the top down. He played a central role in developing the Corporate Integrity Check, used by many organizations to ensure ethical policies are on track and to detect the red flags of fraud and corruption as early as possible.

Nigel also has a Masters in Screenwriting for Film and Television from the Royal Holloway College (London 2009) and is the founder of “The Theatre of Corruption” and a member of the Norwegian Writers Guild. Over the past ten years he has written and developed film, live drama, documentary theatre and interactive e-training, all aimed at raising the awareness of corruption and fraud in society and working towards solutions whereby the “commercial dark arts” can be properly combatted.

Nigel Iyer is the author of four books: the Management Novel “The Tightrope” (2011/2007), “A Short Guide to Fraud Risk” (2010 and published in collaboration with the Chartered Institute of Management Accountants), Fraud and Corruption Prevention and Detection (2007) and Fraud Resistance (2003), the short films “Words in Action” (2011/12) and “The Conversations you really don’t want to hear” (2015) . He also teaches at a number of institutions and business schools including the Leicester University School of Management, where he is a Fellow, and the Norwegian Business School.

2016 Corruption the Musical (2016) – Supported by the Norwegian Arts Council and first performed in April 2015.

2012 - 2015 Ship O’Hoi (Norway – Black Box Oslo, Trøndelag Teatrer Trondheim, Radstua Theatre Tromsø – directed by Pia Maria Roll and Hooman Sharifi) etc
Co-wrote and performed Ship O’Hoi which was played 29 times at Black Box Theatre (Oslo) , Trøndelag Theatre (Trondheim) and Radstua Theatre (Tromsø) and has been widely referred to as one of the autumn’s most important performances.In May 2013 Ship O’Hoi was one of 4 nominations as “Performance of the Year” for the prestigious “Hedda” prize and has since been featured at the international “Human Rights-Human Wrongs” festival in 2015 in Oslo

2010 The Ice-Phoenix (Reykjavik, Iceland)
Performed by members of the City Theatre Company to mixed audiences. The play is in the period following the crash of the Icelandic economy in 2008. It centres around a fictitious regeneration agency “Ice Phoenix”, which inevitably becomes corrupted.

2010 Over Evne III (“Beyond Power”) (Norway – Black Box Theatre) with Pia Maria Roll and Marius Kolbenstvedt)
This play, which has been performed over 20 times at Black Box Theatre, Avant Garden and various festivals around Norway raises the issue of the need to have scapegoats in society along with the chastisement of whistle-blowers.

2007 - 2011 “Fraud and Corruption No thanks!” (a.k.a. House of Cards, Say No to Fraud, “Si Nei til Svindel”) directed on different occaisions by Terje Ranes/ Pia Maria Roll/ Marius Kolbenstvedt/ Simon Lee Phillips and Jon Pall Eylofssen
These 30-minute plays, performed by professional cast for audiences at conferences and similar events depict typical scenarios and have also been performed as “mystery” events. Performed in Oslo (twice), Copenhagen, Stockholm, London (twice), Brussels and Amsterdam, and also the Lofoten Islands.

2011 Words in Action (CIMA. Sterling Power and Gower Film)
Released officially by CIMA in January 2012. This 25 minute long drama, in eight episodes, raises the profile of environmental, ethical and human conflict in the workplace and the need for credible action to match “fine words”.